HOW TO STAY INVOLVED 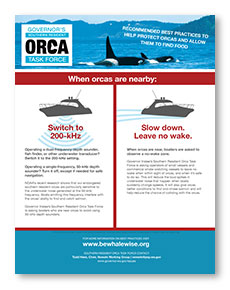 A species in crisis

Puget Sound’s Southern Resident orcas became the focus of international attention in 2018, when their plummeting numbers and critical situation culminated in the death of a newborn calf whose mother grieved over the body for an unprecedented 17 days and 1000 miles.
The Southern Resident orcas have declined to a 30-year low of just 74 animals. This alarming decline signals that the Southern Resident population is in severe jeopardy and at risk of extinction if no action is taken.

The primary factors threatening orcas in Puget Sound are: not enough prey, specifically Chinook salmon; toxic contaminants in the water and their food; and disturbance from noise and vessel traffic.

Year-round, Southern Resident orcas depend heavily on Chinook salmon for food. Chinook salmon are listed as threatened under the Endangered Species Act and many of the remaining populations are far below federal recovery goals.

The Puget Sound Partnership works across Puget Sound to plan, fund, and implement recovery actions by:

Orcas living off the coast of Seattle, Tacoma, and other urban areas are exposed to polluted runoff from roads, rooftops, and buildings. These toxic contaminants accumulate in orcas and can make them sick or vulnerable to disease.

The Partnership tracks these harmful contaminants as part of the Toxics in Fish Vital Sign and works with regional partners to develop a recovery plan, called an Implementation Strategy, that outlines recommendations on the most effective approaches to reduce toxic pollution in Puget Sound. This group also provides technical support to the Southern Resident Orca Task Force.

Orcas emit sounds and listen for their echoes reflected back to them from underwater objects. Echolocation helps them find salmon and communicate with one another. Underwater noise from boat and ship traffic makes it difficult for them to hear their own echoes and capture their food.

From 2012-2015, the Partnership convened the Vessel Traffic Risk Assessment Steering Committee to promote safe maritime transport and reduce the risks associated with oil spills.   Findings from this group now support the Vessels Working Group of the Orca Task Force to identify key actions to protect orcas from vessel traffic and underwater noise. Their recommendations were shared with the Puget Sound boating community as a factsheet.

In March 2018, Governor Inslee issued an executive order requiring state agencies to take immediate action to protect the remaining orca. His order established the Southern Resident Orca Task Force to recommend the best actions to recover the Southern Residents. His order directed the Puget Sound Partnership and the Department of Fish and Wildlife to convene and support the Task Force.

In this role, Partnership staff:

In addition, the Governor appointed the vice chair of the Leadership Council, Stephanie Solien, to serve as co-chair of the Task Force, alongside former Evergreen State College President, Les Purce. Both Sheida Sahandy, former executive director of the Partnership, and Laura Blackmore, exectuive director of the Partnership, served as Task Force members.

More information about the Task Force and its final recommendations can be found on the Governor's site.

Catching sight of an orca while riding a ferry or visiting a state park is always a memorable event. During the summer months, Southern Resident orcas are found in the inland marine waters of Washington and southern British Columbia hunting Chinook salmon and other fish species. Healthy orcas represent a healthy ecosystem because they occupy an important niche at the top of the food web. The thrill of seeing an orca in the wild supports a multi-million dollar whale-watching industry, which supports a healthy local economy.

Report a problem or make a suggestion